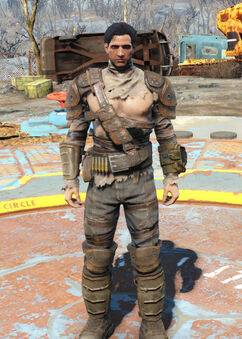 Leather armor is a multi-piece set of armor in Fallout 4.

Leather armor consists of five separate pieces - the chest, both arms and both legs. Like with all other armor pieces, each can be worn over clothing to combine the stat bonuses, however certain outfits may occupy some or all of the armor slots - for instance, the red dress occupies legs and torso slots.

This armor set is fashioned out of belts, straps, braces and pads. Like with other armor sets, various mods can change the look of the armor pieces (for instance the shadowed leather mod dyes the armor black).

There are three variants of leather armor: normal, sturdy and heavy.

Leather armor offers the best Energy Resistance at the cost of inferior Damage Resistance and Radiation Resistance. It is part of a family of specialized armor sets, with the other three members being metal armor which focuses on mitigating ballistic damage over energy damage, combat armor as the most balanced form of protection in the Commonwealth and robot armor, added with the Automatron add-on.

In the Contraptions Workshop add-on, leather armor can be crafted at an armor forge:

Like other forms of moddable armor, leather armor takes different appearance when modded. Standard leather armor is sewn of brown leather. Boiled leather takes a darker, gray-blue matte color. Girded variant looks like being made of several smaller, thicker pieces, sewn together with leather thongs. Treated mod takes on a warm, reddish-brown color with glossy sheen of oiled leather. Shadowed armor is of dark gray hue with a slight shine. Finally, studded leather takes the appearance of the basic variant with added metal rivets and a combination of washers, screws and wingnuts.

Full set of heavy leather armor with the studded modifications