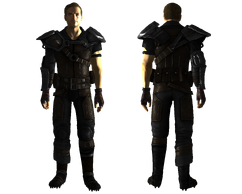 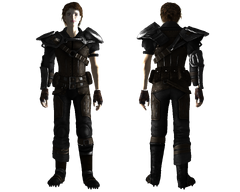 The leather armor, reinforced is a suit of armor in Fallout: New Vegas.

Its appearance varies from normal leather armor in that both of its shoulder pads are about the same size and appear to be made of or plated with metal. The armor also looks the same on both males and females, as opposed to the regular leather armor which has different skins. It is significantly darker in color.

Significantly, reinforced leather armor has nearly the highest Damage Threshold of any non-faction light armor. Vault 34 security armor, Joshua Graham's armor and the Chinese stealth armor are also non-faction with higher DT, yet reinforced leather armor has substantially more health than those armors and can still be repaired with common leather armor, making it far easier to keep in good condition. This makes it very useful for Sneak based characters or players who value movement speed (especially with the Travel Light perk), since heavier equipped armor increases the chance of enemy detection (unless the player has the Silent Running perk) and reduces movement speed.

The armor is very similar to the armor worn by Mad Max a recurring facet of the development in the Fallout series.

Retrieved from "https://fallout.fandom.com/wiki/Leather_armor,_reinforced?oldid=3232051"
Community content is available under CC-BY-SA unless otherwise noted.