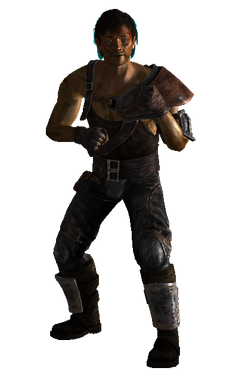 “This armor used to belong to one of those desert-crazy priests. Said wearing it made him bulletproof. Course, that didn't stand up to a little testing. But damn if it wasn't a gloriously fun time.”— Everett

The Leather Rebel is a unique piece of armor in the Fallout 3 add-on The Pitt.

The Leather Rebel is a variant of raider commando armor. Everett describes the armor as having been worn by a desert priest who said the armor was bulletproof, a theory which was proven false when put to the test. Said experiment was described by Everett as "a gloriously fun time".

The Leather Rebel can be obtained by collecting 70 steel ingots for Foreman Everett.

The name of this armor and Everett's story behind it is a reference to the Judas Priest song "Leather Rebel".

Worn by a female raider
Add a photo to this gallery
Retrieved from "https://fallout.fandom.com/wiki/Leather_Rebel?oldid=3281437"
Community content is available under CC-BY-SA unless otherwise noted.