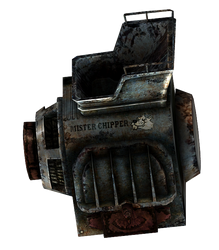 The leaf blower is a miscellaneous item in Fallout 3 and Fallout: New Vegas.

It is one of the four components needed to assemble a Rock-It Launcher.

The leaf blower is identical in appearance to the wood chipper and even bears the name "Mister Chipper" on its side, as well as a cartoon beaver head. One should be careful not to mistake a wood chipper for a leaf blower when collecting items, as the wood chipper has an immense weight of 50 pounds and cannot be used as a crafting component.

Retrieved from "https://fallout.fandom.com/wiki/Leaf_blower?oldid=3129765"
Community content is available under CC-BY-SA unless otherwise noted.