Decreased Radiation from eating and drinking irradiated food and water

Decreased Radiation from eating and drinking irradiated food and water

Discard to recover all radiation 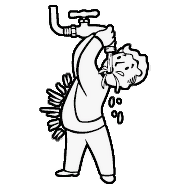 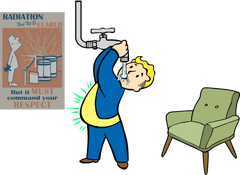 “With the Lead Belly perk, you take 50% less radiation every time you drink from an irradiated water source.”— In-game description

Lead Belly is a perk in Fallout 3, Fallout: New Vegas, Fallout 4, Fallout 76 and Fallout: The Board Game.

With the Lead Belly perk, 50% less radiation is taken every time you drink from an irradiated water source. In Fallout: New Vegas, this benefit extends to all irradiated food and drink.

“Your digestive tract has adjusted to the weirdness of the Wasteland! Are you sick of stimpaks? Detest chemistry stations and making your own chess, or constantly scavenging for them? Then look for comestibles and water sources throughout the Commonwealth without the usual "distaste"! Take this perk or ones that help you when you use chems (like Chem Resistant or Chemist).”— Fallout 4 Vault Dweller's Survival Guide description

The third level of the perk simply eliminates any rads from any ingested item: no rads are shown in the PipBoy, not even "0 rads" is shown.

Taking this perk early on may help out a lot, particularly in a Survival mode game, as most available food (raw or pre-war) carries significant rads, and RadAway is scarce in the beginning of the game. Conversely, this perk has little value for high-level characters, particularly in a non-Survival game, because foods provide only a fixed amount of hit points (whereas stimpaks restore a percentage). However, in Survival mode, this perk is more useful due to the necessity of regularly eating and drinking to stay satiated and hydrated.

“Your digestive tract has adjusted to the weirdness of the Wasteland!”

After being obtained, it can be discarded to set radiation to zero.

Fallout 4 loading screen slide
Add a photo to this gallery
Retrieved from "https://fallout.fandom.com/wiki/Lead_Belly?oldid=3428727"
Community content is available under CC-BY-SA unless otherwise noted.
... more about "Lead Belly"
RDF feed
Has platform
PC +, Xbox One +  and Playstation 4 +