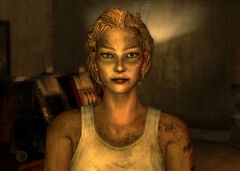 “I like to think that we are Prisoners Of War that managed to escape before capture. I don't know how long it'll be before the Legion crosses the river, but sure as fuck I don't want to be wearing an NCR uniform when they get here.”

New Canaan up north is an attractive option to them. However, they lost all of their money gambling in Vegas, so they are forced to come up with creative ways of generating income. Primm sounded ripe for the picking, especially after the convicts were cleared out, but the new law introduced by the Courier is a serious obstacle in their way.[2] The Courier can choose to deal with the deserters in several ways, resulting in their deaths or the group leaving Primm, headed for New Canaan.[3]

Killing her, or her team of thugs, as they flee after resolving peacefully has no gain or loss of Karma, and items in the casino that have changed from owned to unowned will remain lootable without loss of Karma. Their bodies also remain in the casino.