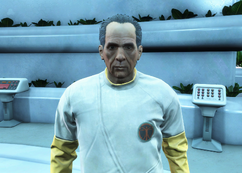 “You know what happens when people get robots to do all their work? They get fat and lazy, that's what.”

Lawrence Higgs is a scientist living in the Institute.

Unlike his peers, Lawrence Higgs has a low opinion on the Institute's dependency on synths with his belief that humanity will grow stagnant if they rely too much on them. When the Sole Survivor first meets Lawrence, he is seen having a frustrating conversation with a synth before talking to the Sole Survivor in which he expressed his discontentment with synths.

Lawrence Higgs appears only in Fallout 4.

Retrieved from "https://fallout.fandom.com/wiki/Lawrence_Higgs?oldid=3285008"
Community content is available under CC-BY-SA unless otherwise noted.