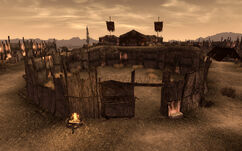 “Light armor and machetes only. The challenger - the one who asks to enter the arena - may be pitted against one or more opponents. All matches continue until one side is dead. No exceptions.”— Otho

Laurifer Gladiator[1] is an unmarked quest in Fallout: New Vegas.

After being invited to the Fort by Caesar, the player can speak to Otho at the gate of the arena, which is overlooked by Caesar's tent in the upper area of the Fort. Male couriers can choose to participate in combat. Women are not allowed to fight in the Legion, and female couriers will be told to "know their place."

During combat, only a machete and gladiator armor can be used; all other equipment is removed from the player's inventory. There are three rounds, and after each one Otho must be spoken to again to begin the next.

After all the opponents are defeated, Otho will comment that nothing would be a challenge for the player, and no further combat will take place. The player's reputation with the Legion will improve.

Retrieved from "https://fallout.fandom.com/wiki/Laurifer_Gladiator?oldid=3456149"
Community content is available under CC-BY-SA unless otherwise noted.
... more about "Laurifer Gladiator"
RDF feed
Has platform
PC +  and Xbox 360 +