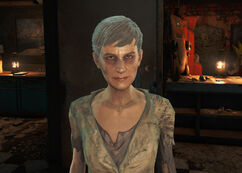 Lauren Plummer is the bartender at Cappy's Cafe in Nuka-World in 2287.

Lauren Plummer was a trader working in Cappy's Cafe with Keith Dawkins prior to the takeover of Nuka-World by Colter, remaining there following the raiders' arrival. Like Fritsch, she does not need to wear a shock collar, saying that the raiders have "a healthy mix of fear and respect."

Lauren Plummer appears only in the Fallout 4 add-on Nuka-World.

Retrieved from "https://fallout.fandom.com/wiki/Lauren_Plummer?oldid=3249552"
Community content is available under CC-BY-SA unless otherwise noted.