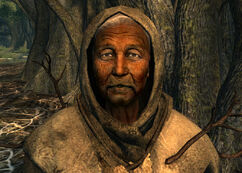 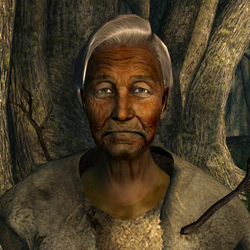 “The spreading of His influence is not a curse, it's a great miracle... a benefit meant for the entire Wasteland!”

Leaf Mother Laurel is the Elder of the Treeminders in Oasis, in the year 2277.

The wife of Tree Father Birch and fellow leader of the people of Oasis, Leaf Mother Laurel spends much of her day wandering around Oasis, tending the plants and flowers, and speaking with the people of the village with her daughter Sapling Yew usually at her side or playing nearby. She believes it is her responsibility to tend to the spiritual and mental well-being of her fellow villagers.[1]

Not much else is known about Leaf Mother Laurel, other than her passion to let the whole Capital Wasteland experience Harold's "gift," contrary to her husband's belief.

Tree Father Birch is her husband and Sapling Yew is her daughter.

Leaf Mother Laurel is always in Oasis. She can be found at the outdoor hut in the mornings, sitting on the middle log. She also wanders around in Oasis and maintains the vegetation. She spends her evenings usually sitting on a stump with her husband and sleeps in a secluded spot with both her husband and child.

Laurel is the common name for Laurus nobilis, a type of tree. All of the human residents in Oasis have horticultural names.

Retrieved from "https://fallout.fandom.com/wiki/Laurel?oldid=3274589"
Community content is available under CC-BY-SA unless otherwise noted.