Followers of the Apocalypse
Children of the Cathedral (undercover)

“Ah yes, the Master, he's the god these nuts worship. Personally, I don't think he's a god, just somebody into manipulating everyone.”

Laura is a member of the Children of the Cathedral and a spy for the Followers of the Apocalypse around 2161.

To onlookers, Laura is just another Cathedral worshiper: A meek, submissive, quiet woman patiently following the lead of the rulers of the Cathedral. She is actually a Followers of the Apocalypse spy working for Nicole, focusing on finding out what is going on in the Cathedral so that the Followers can expose the wrongdoings. When she meets someone who has the pass phrase, she reveals an altogether different person: Bright, sharp, sarcastic, and strong.[1]

She has discovered the Children's plans to conquer the wasteland by systematically taking over towns, the launch point of their attacks being their hospitals, which are stockpiled with weapons and explosives. She is described by Nicole as being extremely loyal to the Followers of the Apocalypse, though it is unclear as to how long she has been working as a spy prior to the arrival of the Vault Dweller.

Laura appears only in Fallout as a talking head. She is voiced by Katherine Soucie. She also is mentioned in the Fallout Bible.

"Oh ... I'm glad you found me. Nicole sent a list with the information I was supposed to find."

"Ah yes, the Master, he's the god these nuts worship. Personally, I don't think he's a god, just somebody into manipulating everyone."

"No. We already talked about this. You'll have to go somewhere else my friend." 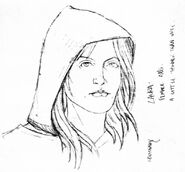 Laura concept art
Add a photo to this gallery

Retrieved from "https://fallout.fandom.com/wiki/Laura_(Fallout)?oldid=3511857"
Community content is available under CC-BY-SA unless otherwise noted.