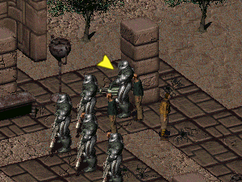 Sir Launcelot is one of the members of King Arthur's squad in 2241.

Launcelot once rescued Galahad from Castle Anthrax. Launcelot is the group "badass", and functions as supporting fire for when someone dares challenge the King's tongue.

Launcelot would probably chuck the Holy Hand Grenade at the Chosen One if he gave him half a chance. Basically, do all the talking through Arthur.

Sir Launcelot appears only in Fallout 2.

Launcelot is a reference to Sir Lancelot, specifically the version from the film, Monty Python and the Holy Grail.

Retrieved from "https://fallout.fandom.com/wiki/Launcelot?oldid=3137117"
Community content is available under CC-BY-SA unless otherwise noted.