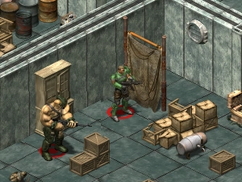 “Today is a day of joy and sorrow for the Brotherhood. Gammorin was a traitor, a murderer, and a deceiver, yet he was a Paladin. His brave deeds once brought much hope to the wasteland. Yet, something happened to him when the Great Storm ripped his airship from the Convoy and crashed it to the ground. From that moment, Gammorin was born, and the Brotherhood lost its favored son.”— Dekker

Latham was a Brotherhood of Steel paladin that later became known as "Gammorin", leader of a super mutant army that fought against the Brotherhood.

The original Gammorin was one of the leaders of the faction of super mutants who fled to the East after the death of the Master and the destruction of the Mariposa Military Base.

Some time after their departure, Gammorin's mutants were pursued by Brotherhood of Steel airships. While most of them ended up in the vicinity of Chicago, far from Gammorin's forces, one of the zeppelins crashed north of the mutant encampment. The leader, Paladin Latham, challenged Gammorin to a single unarmed combat and, to the surprise of everyone, killed the mighty mutant. As he defeated the previous chieftain, the super mutants expected him to become the new leader of their army. Latham suffered a head injury during the combat, and throughout the years, he grew more and more insane, even though he managed to organize the mutant forces into an army nearly as powerful as they had been during the Master's reign. He begins to see the super mutants as his own people, however, he hasn't forgotten the Brotherhood and his past.

When Latham's forces encountered the Calculator's robots from Vault 0, he swore an oath to destroy the cybernetic menace. By that time, he assumed the name "Gammorin", after the super mutant chief he had killed. Gammorin's mutant scientist ran extensive research in order to find a cure to super mutant sterility. However, his laboratory in Jefferson City was taken or destroyed by a splinter faction of the Brotherhood of Steel from the Chicago area, who believed it to be a weapons manufacturing plant. Eventually, Latham/Gammorin and his forces were defeated by the Brotherhood.

When the Warrior and his squad came to meet Gammorin, the former Paladin speaks of the Elders' foolishness and blindness to a new menace from the west, which only his mutants are able to fight. At the end of the fight, being mortally wounded, his last words were that all he had done was in the name of stopping the coming threat. Upon his death, many of his super mutants soldiers were allowed to join this Brotherhood to fight against the robots. Research into a cure for the super mutants' sterility was continued by the Brotherhood, but in the end was unsuccessful.

Latham/Gammorin is the head of the Midwestern super mutant army and very much a boss character - his incredible stats, skills, resiliency and critical chance make him a very dangerous foe, especially in the close quarters of the Osceolla bunker. Despite all of his stats, however, his choice of a Tommy gun as a main weapon makes him a terrible ranged fighter, with the .45 slugs rolling off any decent suit of armor like rain drops.

Latham appears only in Fallout Tactics: Brotherhood of Steel.

Latham/Gammorin was voiced by Dwight Schulz, who also voiced Hakunin in Fallout 2.

Retrieved from "https://fallout.fandom.com/wiki/Latham?oldid=3367821"
Community content is available under CC-BY-SA unless otherwise noted.