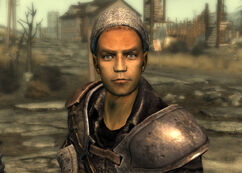 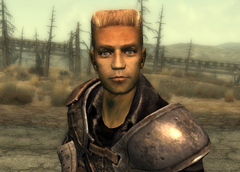 Lazlo without his head wrap

Laszlo Radford is a lone wastelander in 2277.

A friend of Sam Warrick's, Laszlo is roaming the wasteland in search of more copies of his favorite comic, Grognak the Barbarian. He's recently stolen a railway rifle and is having immense fun disconnecting ghoul heads from their spines. He's a madman, who fights first, fights again, and then thinks for a bit afterward.[1]

He is a bit of a patriot, liking to shout out American-related phrases to his enemies such as "Die commie!" and "The right to bear arms shall never be infringed!"[2]

Laszlo Radford appears only in Fallout 3.

Retrieved from "https://fallout.fandom.com/wiki/Laszlo_Radford?oldid=3125208"
Community content is available under CC-BY-SA unless otherwise noted.