Fallout Wiki
Register
Don't have an account?
Sign In
Advertisement
in: Presidents of the U.S.A., Pre-War politicians, Fallout 2 mentioned-only characters,
and 3 more
English

Last President of the United States

Last President of the United States

The last President of the United States was in office before the Great War in 2077.

At some point before the war, he was organizing a summit involving political and industrial leaders from the Appalachia Territory to discuss their success in automating local industry and businesses and how these efforts could be replicated across the nation.[3]

He disbanded the White House press corps and abandoned the White House, relocating to Control Station ENCLAVE roughly six months before the war.[2][4] On the day of the Great War, his executive code was authenticated and used in response to detected nuclear launches.[5][6]

The last president is also mentioned in the Fallout Bible.[Non-canon 1]

Plans for the Whitespring Congressional Bunker

Presidential seal seen in the One of Us quest icon 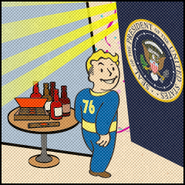 Presidential seal in the One of Us trophy icon 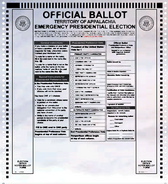 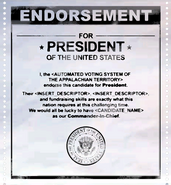