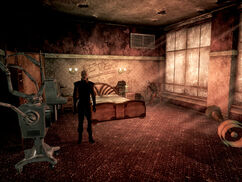 “Find the mute and deal with her. She's somewhere on this floor.”— Father Elijah

Last Luxuries is a quest in the Fallout: New Vegas add-on Dead Money.

Note: If you previously chose to lock Christine in the switching station during the Mixed Signals quest, or threatened to put her back into the Auto-Doc in the Find Collar 12: Christine quest, she will set traps in the Executive suites and will taunt the Courier.

Enter the executive suites. You cannot enter the doors on your right, so you must go left. There will be a small poisonous cloud and, a little farther on, an Average locked door and an open room. The open door will lead to another room with a broken wall, from which you can access the locked room without picking the lock. In the locked room you will encounter a female hologram (talking in Vera Keyes' voice) which will turn hostile if it sees you, and will attack if you get close. To get rid of it, you need to enter the room it is in while the hologram is facing away from you, and go to the bathroom in the corner, closing the door behind you. You will find the hologram emitter inside; shoot it or disable it with a Repair skill of 75.

Once this is done, progress through some rooms through the broken walls and you will find caved-in corridors; follow the corridor through a door on the right, past some poisonous clouds (they are easy to avoid). There is a room on the right. Enter it, and beyond some broken metal shelves on the left you will see a radio on top of washing machines. Disable it, then find the terminal to the right of the opposite door. This has the emergency door override. There is another terminal to the right of the first one which requires an Easy hack; you can use this terminal to disable the hallway speakers and obtain a recipe for the super-heated cosmic knife. All the ingredients for the super-heated cosmic knife, except for the knife itself, are also found in this room: the hot plates and pilot lights are on the shelves, and the forceps are in a wooden box on the washing machines, along with some Med-X.

Leave the laundry room through the door on the other side of the room, and you will be back in the first hallway with the maintenance door now open. Go through, then straight along the corridor, and turn right at the end to enter a room with lockers and an Average terminal, which you can use to make the holograms in the other rooms in the area friendly. A hunting shotgun and ammunition are also in this room. Turn around and you will see two doors: the one on the right will have ammunition and a lever-action shotgun. The one on the left will lead you back through the suites, but if you accessed the terminal, you will have changed the security holograms so they won't attack.

Take the door left of the security locker and head through the broken bathrooms to the room with a suitcase on the bed. In the closet is a safe with a Hard lock containing a stimpak and a super stimpak. Keep heading south to the second room, and pick up the password on the table next to the wine bottle. Keep going south until you reach the last room, and disable the radio on the table. Exit left into the corridor, with a vending machine in an alcove on the right. Go forward, and on the right will be some double doors which lead to Vera's suite. Enter the suite and find a bookshelf on the left holding a Big Book of Science. Christine is in the bedroom through the nearby door. There is an Auto-Doc on the left as you enter the room, which you can use to completely heal yourself.

Christine will explain her story. If you were previously able to pass various Perception and Intelligence checks and exhausted most of your earlier dialogue options with Christine, saying anything other than that Elijah is capable of being reasoned with will result in Christine simply handing over Vera's key and completing the quest. Otherwise, when talking to her, make sure you choose the Speech option comparing her to Father Elijah, as this will stop her from turning on the proximity meters attached to both collars. In this second possible outcome, to get the key without killing her, do not attack her. Instead, run towards the elevator you first entered, and make sure she is following you. She will eventually become civil again and let you talk to her, then will trust you again and give you the key to leave.

Retrieved from "https://fallout.fandom.com/wiki/Last_Luxuries?oldid=3461879"
Community content is available under CC-BY-SA unless otherwise noted.
... more about "Last Luxuries"
RDF feed
Has platform
PC +  and Xbox 360 +