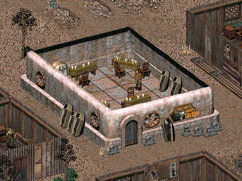 The Last Gasp Saloon is a combination of both a saloon and a funeral parlor in the mining camp district of Redding and is run by Josh Laurence.

This establishment is made up of only one room, which consists of closed coffins acting as tables, as well as open coffins leaning up against the walls, both inside and outside. Not all of the bodies that can be seen in the open coffins are real. In addition, several tombstones are found at the front of the building.

The Last Gasp Saloon appears only in Fallout 2.

Retrieved from "https://fallout.fandom.com/wiki/Last_Gasp_Saloon?oldid=3150595"
Community content is available under CC-BY-SA unless otherwise noted.