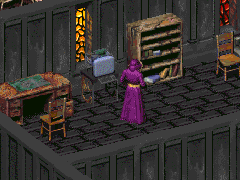 “Learn to embrace pain as your closest friend, for pain is the most instructive force in the universe. Break yourself until you can exist no longer as an individual, then remake yourself into the Master's tool. That is the solution to all of your problems.”

He is a disciplinarian and has a reputation for implementing a curriculum of violence upon his students in the name of self-improvement. He wields a cattle prod and believes that complacence impedes evolution, thus his technique.

"The rod is a holy instrument, through which I instruct my charges. Pain clears the mind of evil thoughts and allows them to better comprehend the glory of the Master."

"I instruct the children. It is my duty. All children are wicked beasts. It is my duty to force them into evolve into human beings. Perhaps you have heard that I do not tolerate frivolity. This is true. I want my charges to suffer as much as possible."

Lasher only appears in the original Fallout.

His methods are similar to those used by Bene Gesserit to discern humans from animals in the Dune series by Frank Herbert.

Retrieved from "https://fallout.fandom.com/wiki/Lasher?oldid=1070829"
Community content is available under CC-BY-SA unless otherwise noted.