The Wattz 2000 laser rifle (referred to as Sunbeam laser rifle in-game) is an Energy Weapon in Fallout Tactics.

The weapon serves as a laser firing long range weapon. It uses microfusion cells as ammunition to create a more powerful laser and has a vented cover over an extended barrel to increase range. Wielded effectively it is a very good midgame weapon for energy weapons users, but could become relatively weak compared to weapons available at higher levels.

This weapon has an aiming bonus when used at long ranges. This bonus comes with an aiming penalty at close range, which is bigger than the standard penalty other ranged weapons have. This limits the laser rifle to being most effective at long range sniping.

Carried by some Reavers in Junction City. 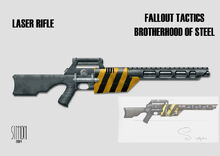