The AER9 laser rifle is a weapon in Fallout 3.

The laser rifle performs admirably at medium and long ranges, where its accurate semi-automatic fire combined with its large ammunition capacity makes short work of most opponents. Its semi-automatic nature prevents it from being a viable close quarters combat weapon. As such, the laser rifle is a good weapon for traveling through the open wastelands where dispatching enemies at a distance is a frequent opportunity. Its rapid semi-automatic fire, sizable magazine, the minimum spread of 0 (meaning potentially perfect accuracy), extremely effective range, and exceptionally low AP cost allows the laser rifle to really stand out. A deadly critical hit from this weapon, as with other laser weapons, will not only kill enemies but also turn them into a pile of colored sparkling ashes, which can still be looted as normal.

A fully repaired laser rifle can fire 1086 bolts, about 46 full cells, from full condition before breaking.

On the barrel, there is a warning that reads, "caution: laser radiation." It's also rated as a "Class 6" laser, which may be a subtle reference to the internationally used laser class rating system, which currently rates the strongest industrial lasers as Class 5. 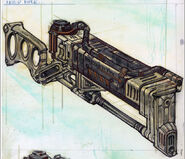