The AEP7 laser pistol is a weapon in Fallout: New Vegas.

Like other energy weapons, the laser pistol has a multiplier on critical chance, making Critical Hits more frequent with this weapon over most others. Critical hits that are fatal reduce enemies to piles of steaming ash. This process does not damage any equipment or items the victim was holding or wearing prior to their death.

By nature of firing a beam projectile, its shots will instantly hit, negating any need to lead the shot. Additionally, the laser pistol's beam will ignite any gas leak traps that it passes through. A laser pistol can be repaired by copies of itself and its variants or any one-handed energy weapon with the Jury Rigging perk. The sound is almost the same but very noticeably quieter than its Fallout 3 counterpart.

The laser pistol can fire a total of about 995 times using standard cells, the equivalent of 34 reloads, from full condition before breaking. 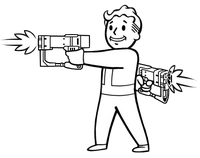 Laser pistol in the perk image for Laser Commander