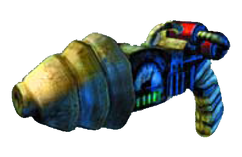 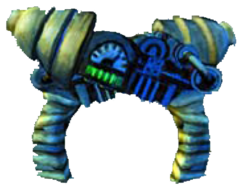 The electric laser pistol is an Energy Weapon in Fallout: Brotherhood of Steel which can be dual-wielded.

The weapon uses a blue electric ray that can affect multiple targets (it pierces the first target to reach another behind it) and cause electrical burns. With the skill Energy Charge, the player character may charge it for the equivalent of three rays for three times more damage at the cost of three times the ammunition. It's a good weapon for Chapter 3 and is not a bad choice until the end of the game. In dual form, it is a very good weapon (until the end of the game) and the best dual-wielded weapon.

In the Fallout: Brotherhood of Steel Official Strategy Guide, the wrong image is shown for this weapon, due to a change of the developers.

First concept of the laser pistol
Add an image to this gallery
Retrieved from "https://fallout.fandom.com/wiki/Laser_pistol_(Fallout:_Brotherhood_of_Steel)?oldid=2811286"
Community content is available under CC-BY-SA unless otherwise noted.