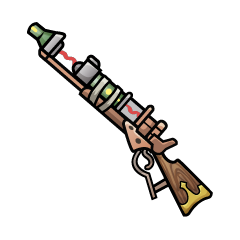 The laser musket is a weapon that appears in Fallout Shelter.

It is based on the laser musket from Fallout 4.

The laser musket is a single shot laser rifle featured in Fallout Shelter. Dealing 10 minimum damage per attack, it has the lowest damage output for an energy rifle in the game. It is reloaded with a crank.

A high Perception statistic is needed to effectively create the laser musket.

Alongside melee weapons and Henrietta, the laser musket is one of the few weapons without variants. It ignores enemy damage resistance making it a deadly weapon in the right hands.

Laser musket card
Add an image to this gallery

Retrieved from "https://fallout.fandom.com/wiki/Laser_musket_(Fallout_Shelter)?oldid=3104074"
Community content is available under CC-BY-SA unless otherwise noted.