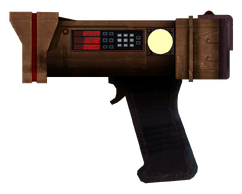 xx007670
“You've found the Laser Detonator Ulysses spoke of, a piece of Pre-War tech that can detonate the nuclear warheads scattered around the Lonesome Road. You can use it to open new paths, kill your enemies from afar, or even discover secret loot caches. Just point it at a warhead, hold down the trigger, and watch the explosion. If what Ulysses said is true, you'll need this to advance, which means there must be a warhead blocking the way forward. You'll need to find the correct warhead and detonate it.”— In-game message when picking up the detonator

The laser detonator is a "weapon" in the Fallout: New Vegas add-on Lonesome Road.

The laser detonator is a detonator powered with microfusion breeder and using laser illumination to trigger the nuclear warheads found around the Divide. It fires a series of coded pulses of visible red laser-light similar to a laser designator and therefore dealing does not deal any damage. When the laser is aimed at a nuclear warhead, it causes it to heat up, eventually leading to the chemical explosive inside detonating, scattering radioactive material around.

It is similar in design and shape to the Compliance Regulator. It has a green coloration with red trim at the barrel, and a glowing yellow light next to the keypad and screen.

It fires a continuous beam similar to that of a laser rifle or pistol, except for the duration. It does not deal damage and therefore serves no purpose other than destroying nuclear warheads. This weapon is essential for completing the Warhead Hunter challenge. 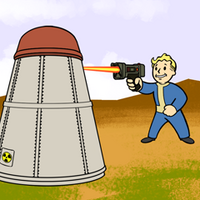