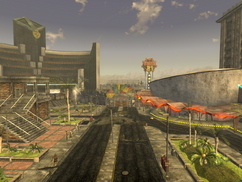 Best known before and after the war for the portion of known as the Strip and accompanying casinos.

The boulevard runs the length of the former Vegas metropolitan area. Starting at Nellis Air Force Base on the east side and the Las Vegas Dunes on the west, it continues past North Vegas Square, following a southwest trajectory until intersecting with Fremont Street.

Around the intersection of the two roadways, the area known as Freeside was founded and has subsequently grown.[1] The road passes by Old Mormon Fort and then heads towards the main commercial areas. Once entering New Vegas proper, the roadway becomes known as the Strip, running in a east west fashion in front of the major casinos. Skirting McCarran International Airport, the boulevard then progresses out of the main region of New Vegas after passing the Fabulous New Vegas sign.

There is an unused street sign in the game files bearing the boulevard's name.[2]

Las Vegas Boulevard is based on the real world roadway of the same name.

Retrieved from "https://fallout.fandom.com/wiki/Las_Vegas_Boulevard?oldid=3459787"
Community content is available under CC-BY-SA unless otherwise noted.