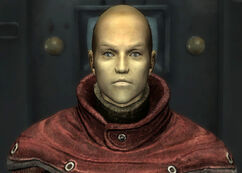 “I suppose it's too much to ask that jarhead Ramos to keep outsiders away from my research.”

Head Scribe Lars[1] Taggart is a member of the Mojave chapter of the Brotherhood of Steel, found at the Hidden Valley bunker in 2281.

As the head scribe, Taggart is supposed to be in charge of all scribe activities in the bunker, including overseeing research, cataloging data, and processing recovered technology. He consistently neglects his duties according to Senior Scribe Linda Schuler however, forcing her to pick up the slack instead.[2] Despite her insistence and repeated complaints to the elder, Taggart remains at his post, fiddling with and coding new virtual reality simulations,[3] aided by his protege, Melissa Watkins, ensuring that every one of the Brotherhood members has spent a minimum of five hours a week in training simulations.[4] He was also supposed to be responsible for the "abort self-destruct sequence" of the Hidden Valley bunker systems, but never got around to implementing it.[5]

Taggart's name and personality are reminiscent of "James Taggart" of Atlas Shrugged.

He shares the same bug with Nolan McNamara, Hardin and Ibsen, saying "Later" the same way that Antony should. [verified]

Retrieved from "https://fallout.fandom.com/wiki/Lars_Taggart?oldid=3326506"
Community content is available under CC-BY-SA unless otherwise noted.
... more about "Lars Taggart"
RDF feed
Has platform
Playstation 3 +  and Xbox 360 +