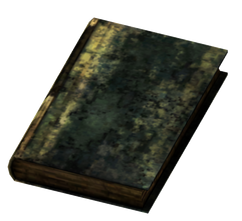 The large burned book is a miscellaneous item in Fallout 3 and Fallout: New Vegas.

It is a large book, heavily damaged by either fire or the nuclear holocaust that started the events of the game itself.

It is useful only as Rock-It Launcher ammunition in Fallout 3. In Fallout: New Vegas, however, it can be used (via the Book Chute in the DLC Old World Blues) to make blank books which can be used in Skill book recipes to make Skill books. With Voracious Reader, they can be used to create skill magazines as well. They can be found in many locations in both games, predominately in houses and libraries.

Large burned books can be found in many ruins across the Capital and Mojave Wastelands, in places too numerous to list. They are often found on book shelves or on the floor inside of most offices, houses, and other buildings.

Retrieved from "https://fallout.fandom.com/wiki/Large_burned_book?oldid=3122752"
Community content is available under CC-BY-SA unless otherwise noted.