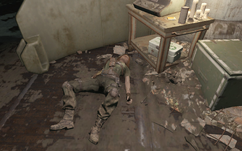 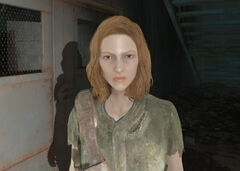 Sergeant Lanier is a deceased Gunner found in Nuka-World in 2287.

A veteran member of the Gunners, Sergeant Lanier was the commander of a Gunner detachment to explore the western areas of the Commonwealth when they came upon the Nuka-World transit center. After killing an individual used as a lure by raiders at the transit center, the squad decided to travel through the mountains instead of by monorail. Rough terrain eventually caused them to lose communications with Gunner HQ, but the team pressed on to verify the presence of a trading post out west. Upon arrival in the Nuka-World area, the group set up camp at the Bradberton overpass.[1]

Although she was unfamiliar with the concept of amusement parks, she knew that Nuka-World had value. Every park was almost like a ready-made fort, ready for occupation. Recon confirmed that the operation would be hazardous without a larger force or power armor support, as Nuka-Town USA was too well fortified and manned for them to try to attack, while the Kiddie Kingdom was covered in radioactive mist. Eventually, as recon reports accumulated, Lanier decided to depart for the Nuka-Cola bottling plant with a recon team.

Unfortunately for her, the area was infested with deadly Nukalurks. Although the Gunners put up a valiant defense, setting up traps, kill zones, and bringing plenty of firepower to take down the Nukalurks, their seemingly inexhaustible numbers eventually overwhelmed the Gunners through sheer attrition. Lanier led the remnants in a desperate last stand by the Nuka Quantum bottler but eventually succumbed to her wounds.

Lanier is one of the few known Gunners that does not have the blood-type tattoo on their forehead. Other examples are Bullet and Sabot.

Sergeant Lanier appears only in the Fallout 4 add-on Nuka-World.

Retrieved from "https://fallout.fandom.com/wiki/Lanier?oldid=3353926"
Community content is available under CC-BY-SA unless otherwise noted.