The Path to Enlightenment

Landview Lighthouse is a location in the Forest region of Appalachia. It is located just southeast of Vault 76 and north of the overseer's camp.[1]

The origins of this landlocked lighthouse are as unusual as the lighthouse itself. Originally conceived as a theoretical concept by engineering students from Morgantown, the concept was ruthlessly mocked by students from a rival university. On a dare, the students decided to make the project a reality, and its construction became a point of pride for everyone involved. The project soon took on a life of its own.

Before construction began, over a year was spent consulting with the lighthouse enthusiast community for general tips, guidelines, and pitfalls to avoid. From these conversations, it became clear that it could not come across as just another "tourist trap." It was determined that the lighthouse had to serve as a true aid to navigation, with a working light and authentic architectural design. It had to have an operating beacon and a 360-degree gallery deck for observation.[2]

The lighthouse was eventually erected in October of 2036. Tourists from all over flocked to the curious structure and raved about the beautiful view of the landscape it provided from atop the trees. It was dedicated to Donald and Shirley Jamieson, the two professors who helped spearhead the project from the very beginning. The Jamiesons lived in the nearby house, where they served as lighthouse keepers full-time, keeping it functional solely on donation money from visitors. Future students continued to develop the landscape over the years, by building a lighthouse keeper's house, a picnic pavilion and general reforestation to recover from previous timber harvests of the surrounding area.[2]

Landview Lighthouse is a 102-foot tall structure thousands of feet above sea level, with 76 steps to climb for visitors to reach the 360-degree gallery deck. The second tier lamp room features a rotational Fresnel lens beacon capable of projecting a beam for over 25 miles. Guests on the 360-degree gallery deck could enjoy unrivaled views of various landmarks in all directions: Beyond the mountain to the north lay Grafton, a major shipping hub and railroad intersection for the area. To the east, Morgantown, home of Vault-Tec University and the founders of the lighthouse. In the distance was the "Top of the World" located at Pleasant Valley Ski Resort, featuring the highest elevation in the region. To the south is the New River Gorge Bridge, one of the longest bridges in Appalachia. On a clear day, the unmistakable silhouettes of the luxury mega mansions in Bramwell can also be spotted.[2]

A long dirt path leads up to the hill on which the lighthouse can be found. A few mole rats can be encountered on this trail. At the top, a small townhouse sits to the west and is inhabited by some feral ghouls. The first floor holds a basic kitchen and dining room, while the second floor is a bedroom with two skeletons inside: one lying on the bed and the other at a desk with a terminal on it. Directly across from the house is an American flag that waves on the edge of a cliff.

The lighthouse itself is positioned at the southern end of the area, and on its top floor are a number of different containers, including ammo boxes and duffle bags, as well as a sleeping bag, on which the skeleton of Brother Moncrief lies. The observation deck has an air sensor from which a holotape can be taken. Inside the cupola is a footlocker that can be looted.

About 100 feet to the north, there is a small covered picnic area, where a settler corpse can be found. A holotape can be looted, in which the chem addict takes some unknown chems, and when he sees the lighthouse, he starts panicking, thinking the ocean is near. There is also a water pump available in the picnic area.

Landview Lighthouse appears only in Fallout 76. 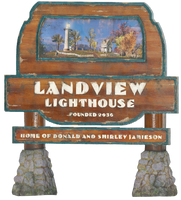