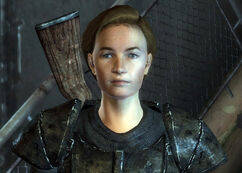 Commander Lana Danvers is a Rivet City security guard in 2277.

Lana Danvers was born in 2247. Danvers, 30, is Harkness's second in command and best friend, though their relationship is strictly platonic (her husband was also a Rivet City security officer, but he died of disease a couple of years ago). If Harkness leaves Rivet City, she is promoted to the security chief. Danvers gives preferential treatment to hangar deck residents. She has a mild disdain for upper deck residents; this is a source of mild friction between Harkness and Danvers.[1]

She is the daughter of the founding Rivet City Council member Brad Danvers.

Lana Danvers appears only in Fallout 3.