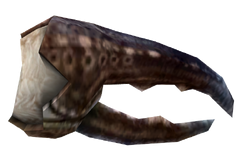 Lakelurk meat is a consumable item in Fallout: New Vegas.

This meat is dropped from lakelurks, which often reside on the shore of large bodies of water in the Mojave Wasteland. It is an ingredient for crafting the wasteland omelet.

Lakelurks have a 90% chance of not dropping any lakelurk meat and a 10% chance of dropping exactly three pieces.

Lakelurk meat uses the same model as mirelurk meat from Fallout 3, despite the fact that lakelurks do not have the crab-like pinchers of the mirelurks.

Retrieved from "https://fallout.fandom.com/wiki/Lakelurk_meat?oldid=3163178"
Community content is available under CC-BY-SA unless otherwise noted.