Lakelurks are creatures found in the Mojave Wasteland in 2281.

Lakelurks are mutated creatures that live around aquatic areas like Lake Mead. They attack by using shrieking sonic pulse waves from afar to stun enemies, then rip them apart using their claws. They are fiercely territorial and extremely aggressive, attacking almost anything that comes near them or their nests. They are usually found in small groups of two to three, though they can occasionally be found in larger groups comprised of around five to eight. They have a high Perception, which makes them very quick to find potential prey within their immediate area.

If they follow their prey into the water, they will have no underwater attacks and will only continue to glare. If their sonic attack is fired from land, it will pass straight through the water as it does through the air, putting their prey at a disadvantage of not being able to defend themselves.

The standard lakelurk with all characteristics stated above. The largest lakelurk hot spots are Lake Mead and the caves inside Camp Guardian. There are also large groups at Blue Paradise Vacation Rentals and at Ruby Hill Mine. Up to four can be found down the hill from the cap counterfeiting shack near Lake Mead, and around four lakelurks can be found on the scavenger platform. Four more lakelurks may be discovered just south of the Hoover Dam southern fence line barrier on the eastern side of the Colorado River in a small cave area. At lower levels, lakelurks will rarely drop lakelurk meat when killed but do so at higher levels. The lakelurk shriek has a 50 damage health effect that ignores DR/DT along with a -10 to Perception effect.

The lakelurk king is a stronger variation of the standard lakelurk. While visually similar, the king has slightly glowing eyes, fins, claws, and other protrusions. Also of note is the apparent light coloration resembling "body paint" on its chest and back. It can be found in the Camp Guardian caves in a large room among multiple lakelurk egg clutches. Killing it will cause the other lakelurks in the cave to frenzy and become hostile towards each other.

While using a 12.7mm pistol, a lakelurk can stay at zero Hit Points without dying. A companion or other NPC will have to kill it for you.[verified]

Lakelurk attacking on the scavenger platform 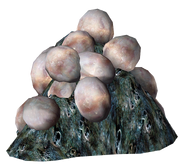 Lakelurks in the Camp Guardian caves