The Lake Mead Cave is a location in the Mojave Wasteland. Located directly southeast of Callville Bay and east of the scavenger platform, the entrance is located underwater and is marked above the surface by a partially sunken fishing boat.

The entrance to the cave is underwater, below a big ledge. At the top of that ledge is a small fishing boat, partially above water with the majority below the waterline. On the lake floor, wedged against the starboard side of the boat, are four gore bags piled together that randomly contain mutilated body parts, a few frag grenades and/or various ammunition.

The cave is split into two major sections. The first section has an above-water surface that can be used to access oxygen and to regain health by drinking the rad-free water. The majority of the first area is underwater, and near the entrance to the second area to the left, there are several crates of ammunition and two first aid boxes to loot. There is a small opening low to the wall at the edge that leads to the second section.

The second section has no way to access oxygen, so the rebreather is highly recommended. A skeleton lies south-southwest of the large central pillar, along with a few suitcases, various loot and a large number of unusable poker chips. 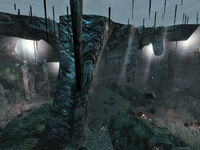 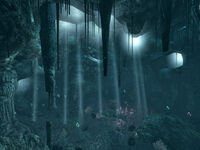