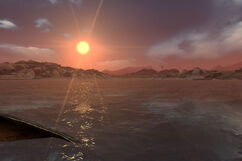 “There's a chance I could crash us all in to the middle of Lake Mead, that place seems to attract aircraft for some reason.”— Daisy Whitman

Lake Mead is a reservoir that serves as the primary source of pure non-irradiated water to the Mojave Wasteland.

Lake Mead was named after Elwood Mead (1858–1936), who was the commissioner of the U.S. Bureau of Reclamation from 1924 to 1936 during the planning and construction of the Boulder Canyon Project, later renamed the Hoover Dam, that created the dam and lake. Before the war, the lake and surrounding recreational sites were maintained by the National Park Service.

Lake Mead encompasses a large contingent of the map to the northwest. Many locations can be found directly abutting the shoreline, including the Hoover Dam, holding the reservoir to the south. Other locations such as Boulder Beach Campground, Fisherman's Pride shack, Callville Bay, and Guardian Peak dot the lake's perimeter.

Several points of interest can be found either on or under the lake itself, including the site of a crashed B-29. Directly behind the plane lies a partially sunken ship resembling a tugboat, red in color, which has some gore bags coming out of a hole in the hull. Directly below this ship is the underwater Lake Mead Cave.

There is another cave system accessible by the lake, Camp Guardian caves, which is near a shipwreck. The area consists of a sunken boat, a half-buried body and a large number of poker chips. Along the lake's floor is also a sunken Sunset Sarsaparilla truck, with its contents spilling out into the nearby vicinity. These contents include approximately 11 dozen empty Sunset Sarsaparilla bottles and several Sunset Sarsaparilla crates. Floating above close to the wreckage is the scavenger platform.

The lake bed is comprised mostly of sand, rocks, and seaweed. There are fish in the lake, although they cannot be interacted with. Lakelurks can be found in abundance along the shores and serve as the most prominent enemy encountered in and around the lake.

On the Boulder City billboard

The fish swimming in the Lake

The entrance to Lake Mead Cave in comparison to the tugboat

Lake Mead scenic overlook
Add a photo to this gallery
Retrieved from "https://fallout.fandom.com/wiki/Lake_Mead?oldid=3457874"
Community content is available under CC-BY-SA unless otherwise noted.