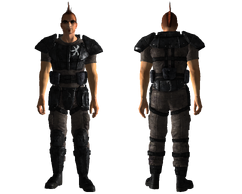 Lag-Bolt's combat armor provides 38 points of Damage Resistance and grants a +10 to both Action Points and Big Guns.

It is found in La Maison Beauregard on Lag-Bolt as part of the unmarked quest The Sorrowful Suitor.

Retrieved from "https://fallout.fandom.com/wiki/Lag-Bolt%27s_combat_armor?oldid=3171807"
Community content is available under CC-BY-SA unless otherwise noted.