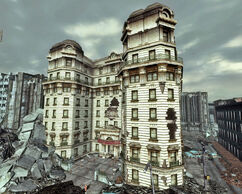 La Maison located to the south on the map 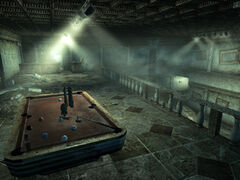 “If someone finds this... please get this to my lover at the La Maison Beauregard Hotel in East Georgetown... he'll want to hear what I have to say.”— The final words of Lag-Bolt's lover.

La Maison Beauregard is located by Georgetown East in Washington, D.C. The interior of the building is quite small.

The outside walls of the building have some holes in them revealing some broken cement floors. The one directly up from the entrance is located on floors four and five and have been mostly filled with rubble and debris. The other opening in the building is located to the right and it reveals floors three and four. The sign has remained in very good condition, compared to the decorative designing above the sign which is missing pieces of stone. There is an outer section behind some decorative railing that contains some tables and chairs with some nearby trash cans. The front pillar to the left of the entrance has fallen and is broken in two.

The interior of the building near the entrance has very damaged wallpaper and the floors are shattered. The two decorative chairs are in very good condition in contrast to the rest of the room. To the left of the entrance is a desk with a cash register and a chair. The main room has a landslide of debris, junk and furniture such as a bed and a couch. The only place where this could have come from is the blocked off doors at the top of the landslide. There is a bar to the right of the area at the top of the landslide with a shelf where drinks were once kept next to a refrigerator. There is also a flickering Nuka-Cola sign at the end of the counter. To the left of the landslide area on the top floor is also a pool table with two white pool balls. The rest of the building is blocked off by rubble making the accessible interior very small.

There are some leveled super mutants inside and two out in the courtyard ready to greet the Lone Wanderer. They are mostly equipped with heavy weapons such as miniguns and missile launchers.

La Maison Beauregard is French for "The House of Beauregard."

U.S. Army: 30 Handy Flamethrower Recipes
Add an image to this gallery
Retrieved from "https://fallout.fandom.com/wiki/La_Maison_Beauregard?oldid=3091838"
Community content is available under CC-BY-SA unless otherwise noted.