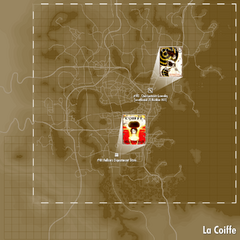 La Coiffe is a magazine in Fallout 4.

La Coiffe is a pre-War magazine about hair styles. By reading issues, the Sole Survivor unlocks additional hairstyles at the barber.

La coiffe is French for "headdress."

Fallon's department store
Add a photo to this gallery

Megaton haircut
Add a photo to this gallery
Retrieved from "https://fallout.fandom.com/wiki/La_Coiffe?oldid=3368357"
Community content is available under CC-BY-SA unless otherwise noted.