Creates three beams that together do increased damage. (+30%)

The LAER mod - prismatic lens is a weapon mod for the LAER in the Fallout: New Vegas add-on Old World Blues.

Similar to the laser rifle beam splitter, this mod splits the LAER's beam into three projectiles. If all beams strike, it provides an overall damage bonus of 30%, in effect increasing damage dealt by 19 (a point .5 would technically be added, but does not show in-game). This may however decrease damage against heavily armored enemies, as the enemy's armor will reduce damage from each beam. Each beam is also independently capable of a critical hit.

Sold by the Sink Central Intelligence Unit after retrieving the Sink CIU upgrade holotape from the roof of the Signal Hills transmitter.

When applied to Elijah's advanced LAER, the per-shot damage increases without splitting the beams. [verified] 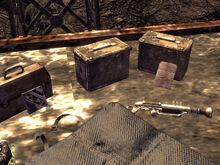 The LAER modification tape, on the roof of the Signal Hills transmitter
Add an image to this gallery
Retrieved from "https://fallout.fandom.com/wiki/LAER_mod_-_prismatic_lens?oldid=2903813"
Community content is available under CC-BY-SA unless otherwise noted.