The LAER is a decent all around energy rifle. It does include several drawbacks however, such as its low critical hit damage, low item HP and its rarity, so the player character may have to rely on the Jury Rigging perk or weapon repair kits, especially if using over or max charged ammunition. It has a very high spread for an energy rifle, limiting its usefulness at longer ranges.

When compared to its variant, Elijah's advanced LAER, the standard model could be viewed as the more practical version as it has 50% more HP, although it does shoot slower.

The LAER can fire a total of about 370 times using standard cells, the equivalent of 19 reloads, or 14 reloads when modified with the auxiliary recharger chip, from full condition before breaking.

Seven LAERs can be found in total:

The LAER resembles a mix of many existing energy weapons; the barrel looks like the pulse gun, the microfusion cell is held in a basket on the bottom like a plasma rifle, the stock is similar to a laser rifle, and it displays vacuum tubes similar to a recharger rifle. It also offers very high damage (on par with the plasma caster).

LAER on the roof of the X-13 research facility

In a room in the Forbidden Zone's dome 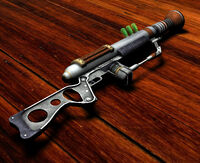 Behind the Bright Lights & Big City
Add a photo to this gallery
Retrieved from "https://fallout.fandom.com/wiki/LAER?oldid=3440747"
Community content is available under CC-BY-SA unless otherwise noted.