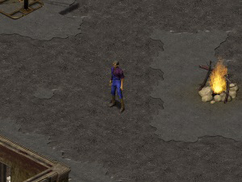 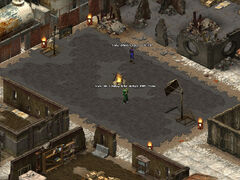 L33tleboy is a character the Warrior can run into during the special encounter L33tists.

L33tleboy is running around a derelict building complex with Ph4tman, shouting L33T phrases at one another.

They cannot be interacted with.

L33tleboy appears only in Fallout Tactics.

His name is a reference to the nickname of the atomic bomb that was dropped on Hiroshima towards the end of World War II.

Retrieved from "https://fallout.fandom.com/wiki/L33tleboy?oldid=2831783"
Community content is available under CC-BY-SA unless otherwise noted.