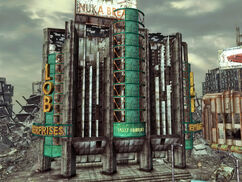 Located at 18527 Fairford, L.O.B. Enterprises was a pre-War weapons manufacturer[1] involved with the People's Republic of China before the war, and spent a lot of time and resources developing a new incendiary sidearm for them (known as "Project Zhu-Rong"), culminating in the Zhu-Rong v418 Chinese pistol. Rumors arose and subsequently spread of their activities, and L.O.B. Enterprises soon came under federal scrutiny, due to importing Chinese products from Happy Liberty Imports, a Chinese front. As a result of this, its employees were required to carry low-grade military weapons at all times,[2] and received training in the event of a federal invasion,[3] or nuclear exchange. The company had many corporate policy forms for various procedures and events, ranging from sexual harassment,[4] capitalization in sent electronic mail, and issued gear to employees while swearing them into the "sovereign L.O.B. republic."[5]

Their activities were discovered by the authorities just hours before the Great War, and their the headquarters was invaded by federal agents.[6] The assault robots are the only ones left, programmed to keep the building secure.

It is divided into three areas: the main area, east wing, and enterprise archives. In 2077, shortly after Project Zhu-Rong's completion, the building was invaded by U.S. military security forces, comprised mostly of robots. Due to the Great War breaking out on October 23, the U.S. military robots remained inside, keeping the premises secure for over two hundred years since that time.

L.O.B Enterprises appears only in Fallout 3.

Teddy bear sitting on a chair

Skeleton in the entry

Skeleton in the cafeteria
Add a photo to this gallery

Retrieved from "https://fallout.fandom.com/wiki/L.O.B._Enterprises?oldid=3458534"
Community content is available under CC-BY-SA unless otherwise noted.