L'Enfant Plaza and L'Enfant South are locations that can be reached through Hazmat disposal site L5 from Mall Southwest, or from the irradiated metro, which enters the Plaza through L'Enfant South.

A large plaza that served as an open-space commuting thoroughfare before the Great War, now populated by a large number of super mutants.

In L'Enfant South, there's an office building that once housed the Capitol Post newspaper (simply marked "Office" on the local map). The building contains a few computers with the text of the articles that appear on the loading screens.

In the basement of this building is the remains of Gibson with a key and a note saying "search the house!" The house is the Gibson house located in Minefield, and the key opens the model of home on the ground floor of the Gibson house.

To the west of the Capitol Post newspaper office is the L'Enfant Café (C). The cafe has a few dead raiders, two first aid boxes, some Buffout, and a mine box. Madame Jealle's is to the west of the cafe (location will mark on the local map as "Shop"), behind Besnik's Barbershop.

L'Enfant appears only in Fallout 3. 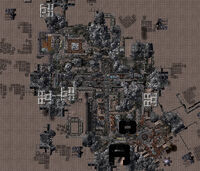 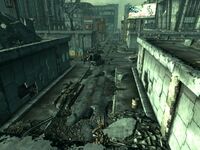 Burial mound with part #1 of the search party log