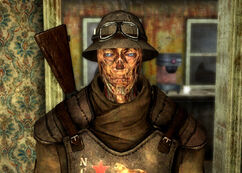 We Will All Go Together
Arachnophobia 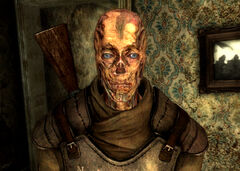 Kyle without the helmet

Private[1]Kyle Edwards is an NCR soldier turned ghoul found at Camp Searchlight in 2281. He's holed up in a Searchlight home northwest of the elementary school.

Private Edwards has been affected by the radiation bomb detonated at the Camp by Legion infiltrators.[2] He has suffered ghoulification, but has not turned feral, unlike his comrades. Fearing the reaction of NCR forces,[1] the prospect of turning feral due to the ambient radiation at the camp, and the radscorpions that have moved in since,[3] Edwards hid himself in one of the houses.[4]

He is currently trying to figure out how to move forward with his life, but he has no idea where to go, how to live as a ghoul,[5] and he suspects that he will get shot on sight due to latent bigotry (which he is isn't wrong about). His former commanding officer, First Sergeant Astor, believes every ghoul in Camp Searchlight is suffering, feral or not, and needs to be put down as a sign of compassion.[6][7][8] In the private's own words, he "may be suffering, but [he] still wants to live."[9] Once he is informed of Ranger station Echo, he will finally feel like he has a place in the world since he underwent ghoulification and will report there immediately.[10]

Speaking to First Sergeant Astor about Private Edwards reveals that he thinks he should be killed to end his suffering, despite knowing he isn't feral. When pressed, he suggests he might head to Ranger station Echo as they are run by a ghoul. A Speech check of 50 or an Intelligence check of 7 will persuade Sergeant Astor to let Edwards rejoin them, who will reward the Courier with 50 caps and Karma if they give him the good news.

Retrieved from "https://fallout.fandom.com/wiki/Kyle_Edwards?oldid=3230728"
Community content is available under CC-BY-SA unless otherwise noted.