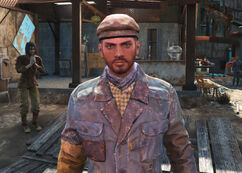 Kyle is a resident of Diamond City. Like many other residents, he fears that his family and friends might be replaced by synths. After leaving the Diamond City market cell (e.g. fast traveling away or entering Home Plate or any other interior or exterior cell), upon returning to the Diamond City market, the Sole Survivor will encounter Kyle accusing Riley, his brother, of being a synth at gunpoint.

The Diamond City security officers kill Kyle after he refuses to put his weapon away. Alternatively, the Sole Survivor can intervene by killing Kyle. Afterward, an officer will complement the Sole Survivor's shooting ability and praise them for taking action. Riley will thank the Sole Survivor for saving him.

After the situation is resolved, if the Sole Survivor talks with the Diamond City security officer, it is possible to ask about what happened. One of the options is a Charisma check.

Kyle appears only in Fallout 4.

Retrieved from "https://fallout.fandom.com/wiki/Kyle_(Fallout_4)?oldid=3289967"
Community content is available under CC-BY-SA unless otherwise noted.