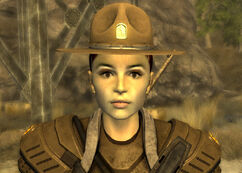 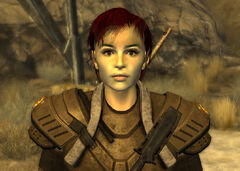 Ranger Kudlow without her hat

“You must be mistaken - I haven't filed any report like that. Trained deathclaws? I would have remembered that.”

Ranger Kudlow is working at Ranger station Foxtrot and keeps lookout for the Great Khans' activities. She dislikes Comm Officer Lenks' jumpiness and conduct that does not convey her ideals of how an NCR ranger should behave.

The Courier may approach her and allow her to tell her view of the outpost's mission and some details about her troops.

Retrieved from "https://fallout.fandom.com/wiki/Kudlow?oldid=3124396"
Community content is available under CC-BY-SA unless otherwise noted.