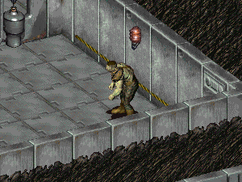 “This prison cell block. Here we keep humans until you dip them. Good stuff, huh?”— Krupper to the Vault Dweller

Krupper is a super mutant stationed at the Mariposa Military Base, where he guards the prison cells with Flip in 2161.

Like most other mutants in the base, the Vault Dweller can convince him they are one of the Children of the Cathedral by wearing purple robes. Krupper reveals to the Vault Dweller that he is, in fact so, homosexual. Even so, Krupper will not 'grant' them access, claiming that even the Children aren't allowed into prison holding cells.

Krupper appears only in Fallout.

Retrieved from "https://fallout.fandom.com/wiki/Krupper?oldid=3275231"
Community content is available under CC-BY-SA unless otherwise noted.