View source
watch 24:51
Fallout Interactive Experience
Do you like this video?
Play Sound
The Pitt character

BeardGoateeWideFull
EyebrowM
“He watches over the city from Haven, his tower in Uptown. Take the northeast exit from here and look for the tallest building in town. Oh, Ashur also said that he has a few gifts for you. You'll find them in the container behind me. Enjoy. And don't keep the man waiting.”

Krenshaw is Ashur's second-in-command of the Pitt in 2277.

Krenshaw is Ashur's right-hand man and is in charge of maintaining the peace, or as close to a violent suppression of Pitt slaves and trogs as he can manage without culling too many of the worker population. He also maintains the floodlight generators in Uptown; plunging this area into darkness would spell doom, as the trogs would overrun Haven.[1]

Krenshaw has growing concerns that the slaves plan to revolt and is also worried that the auto axes they manufactured will be used in their plan to overthrow the Pitt raiders. He seems to question Ashur's actions and leadership, and subsequently his loyalty is a concern. His attitude towards his leader is seen in action upon entrance in Haven, although he does win Ashur's promise to address the situation.

Krenshaw appears only in the add-on The Pitt for Fallout 3.

Krenshaw and Ashur in the Pitt Downtown 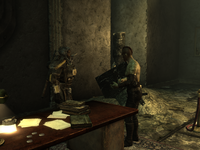 Krenshaw and Ashur in the Haven