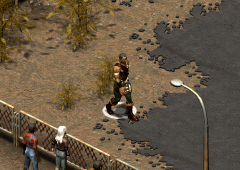 “That's right, blokes and sheilas. Gather round. What I 'ave 'ere is your typical giant mutated Komodo Dragon, my namesake if you will, a real beautiful animal. Now what I'm gonna do 'ere is bloody dangerous, so I don't want any of you gallahs to try this without supervision. Basically, I'm going to annoy the living bejeezus out of this 'ere Komodo an' see what he makes of that. 'ere I go!”

Komodo Man is a Komodo dragon hunter in 2197.

The Warrior listens to him address the crowd of his intention to annoy the Komodo dragon that is with him in the pen. He then fights the Komodo and is killed as a result. The Komodo Man's corpse can not be looted.

Komodo Man is a reference to the late Steve Irwin, aka "The Crocodile Hunter".