“That's right, blokes and sheilas. Gather round. What I 'ave 'ere is your typical giant mutated Komodo Dragon, my namesake if you will, a real beautiful animal. Now what I'm gonna do 'ere is bloody dangerous, so I don't want any of you gallahs to try this without supervision. Basically, I'm going to annoy the living bejeezus out of this 'ere Komodo an' see what he makes of that. 'ere I go!”— Komodo Man

Komodo Man is a special encounter in Fallout Tactics.

In this encounter, Komodo Man will first be seen promoting to an audience his upcoming wrestling match with a Komodo dragon. Once the match starts, the Komodo dragon will eventually kill Komodo Man should he be left to his own devices, and the crowd will then disperse. Should the Warrior get involved and helps secure Komodo Man's victory against the Komodo dragon, they will be awarded an experience bonus.

Komodo Man is a reference to Steve Irwin, as well as the South Park episode "Prehistoric Ice Man", where a parody of him makes the same such quotes as Komodo Man. 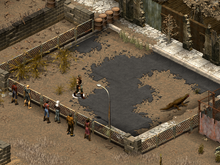 Komodo Man promoting the upcoming fight
Add an image to this gallery
Retrieved from "https://fallout.fandom.com/wiki/Komodo_Man?oldid=3300338"
Community content is available under CC-BY-SA unless otherwise noted.