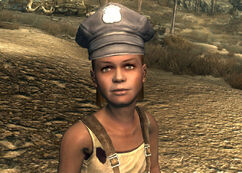 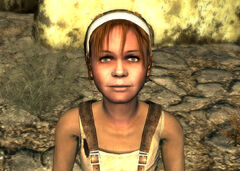 Knock Knock without her police hat

“Hey mungo. This is an A B conversation so C your way out.”

Knock Knock was born in 2263. Long ago, an earlier generation of kids got a book from Vault 87 called Vault-Boy's Big Book of Laughs for Kids. Even though the book has long since been destroyed, many of the jokes were passed down through the generations, and the knock-knock joke has been her favorite sort of humor, even if it's not always understood.[1]

She is the twin sister of Knick Knack and changed her name from Sue to Knock Knock, because "Knock Knock and Knick Knack sounded better than Knick Knack and Sue." Her role in the community is to be in charge of "morale," a job description that includes telling jokes and keeping the peace as an officer of the law.[2]

She seems to have respect for the Lone Wanderer and tries to learn as many stories and jokes as she can. She found a book (Vault Boy's Big Book of Laughs for Kids) to help her with jokes, but these have since then gotten old, and she wants to know more.

Knock Knock wanders around Little Lamplight all day until she goes to sleep.

Knock Knock appears only in Fallout 3.

Exploit: If one keeps asking her for her jokes and lie that they're funny, they will get additional experience each time this is performed. [verified]